Skeleton in Action – The Start

HomeSkeleton in Action – The Start 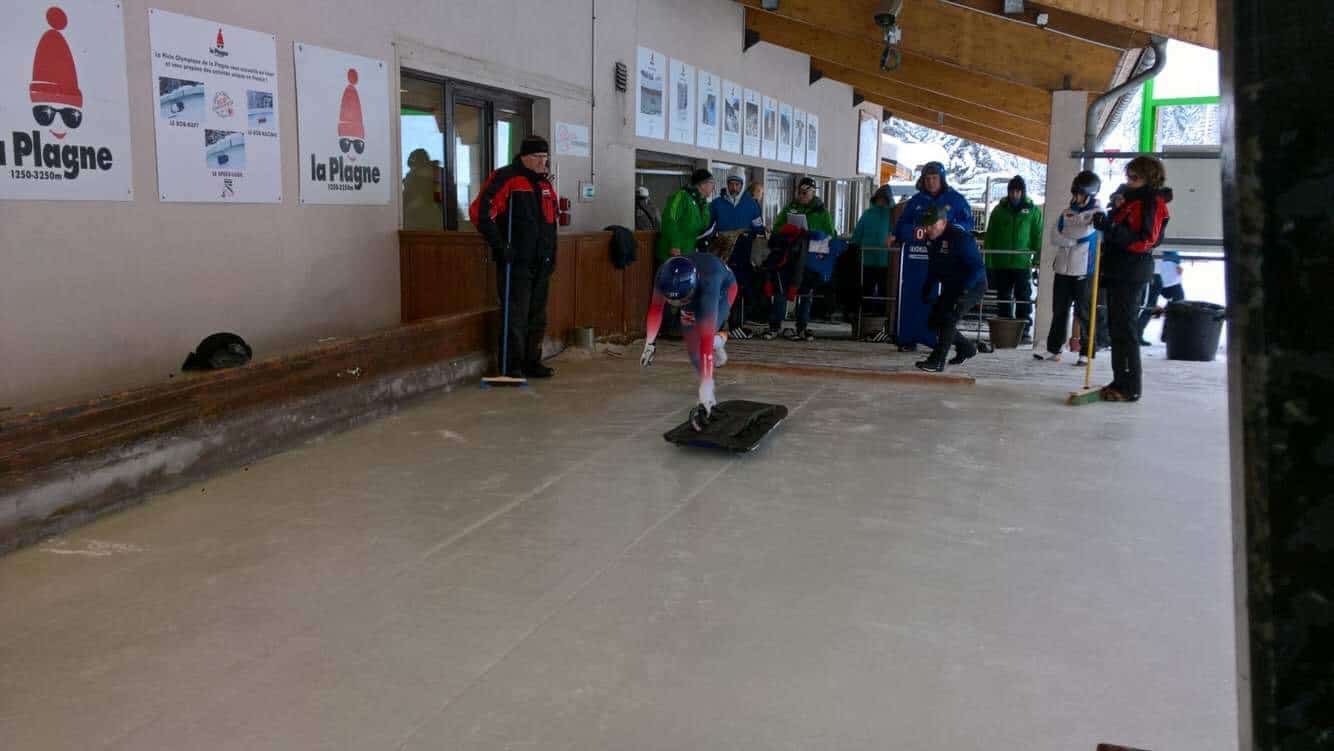 Skeleton is a winter sliding sport. Imagine a huge waterslide filled with ice, you slide down it headfirst on a sled (think an oversized baking tray) with some steel runners wearing just a helmet for protection. Athletes go one at a time, racing the clock to see who can get from top to bottom in the quickest time, hitting speeds of up to 140 kph with their chin centimetres from the ice. The winner is the athlete whose cumulative time over two go’s is the quickest.

How did you get into skeleton?

I applied for a talent search called #power2podium, ran by UK Sport and British Skeleton. I was encouraged by a friend, intrigued by the sport and captivated by the opportunity it presented if I was to go all the way.

Of course, I wasn’t naive enough to think that it would be easy or that it (the Olympics) was guaranteed. I did believe it was possible though and that sealed the deal. I applied and the rest is history. However, it hasn’t been a smooth journey. Skeleton presented challenges I’d rarely (if ever) had to deal with on a regular basis. I’d be lying if I said I loved the sport straight away; I didn’t. Hitting walls at high speed with little protection and no control (oh the early days!) was not my idea of fun; but I had the bigger picture in mind and I am persistent.

How fast do you travel?

Yes! You look out of the top of your eyes to see a short distance ahead of you. You also use a lot of peripheral vision.

Isthat bobsleigh/do you do bobsleigh too?

No. Skeleton is a separate sport to bobsleigh and I have never been in a bobsleigh!

Is it that feet first one?

No, skeleton is head first. Luge (another sliding sport) is feet first.

Does the UK have a track?

No we don’t. We train at the University of Bath on a dry push-track over summer and head abroad over winter to slide.

What kind of training do you do?

As well as sliding (when you do the actual sport), I lift weights, sprint, do core exercises, plyometrics, and mobility.

Have you been to the Olympics?

No I haven’t been to an Olympics. The last Olympics were February 2018 and I had only been sliding for three years at this point. Great Britain were represented by my teammates, Lizzy Yarnold, Laura Deas, Jerry Rice and Dominic Parsons.

Where is the next Olympics?

Do you know Lizzy Yarnold?

Yes, all the GB skeleton athletes train as one group over the summer and then we split onto respective race circuits over winter.

Imagine a huge concrete waterslide filled with ice. All but one of the tracks we visit are artificial. In St. Moritz, they build the track from ice and snow every year. It lasts for a couple of months.

Have you had any bad crashes?

Unfortunately, yes! I have had two concussions. One in Lake Placid and one in St. Moritz. I have also had bad crashes in Sigulda and Whistler where I lost my sled and ended up skidding on my bum and knees down the track.. very painful!

Do you wear padding?

Not much. On challenging tracks I might cut up some yoga mat and shove it inside my race suit. This can take some of the sting out of hitting walls but doesn’t protect from bruises. We do always wear a helmet though.

What do you do over summer?

Train! We have a month off where we do some training but don’t have to be in Bath. The rest of the summer is spent training at the University of Bath Monday to Saturday 8-3 ish. This is also when I train and see KimFit clients.

What equipment do you need/use?

My sled! We have several sets of runners and a saddle that fits to the sled to complete it. I also wear a helmet and a race suit for protection.

What is your goal?

To win a gold medal at the Beijing 2022 Winter Olympic Games.

How do you steer?

You use your shoulders and knees to turn the sled. You can also use your head for gentle steers and feet for hard (emergency) steers.

What races do you do and who do you race against?

There are three race circuits, Europa Cup (like league one), InterContinental Cup (like the Championship) and World Cup (like the Premiership). So far I have raced on the Europa and Intercontinental Cup. There are lots of nations that do skeleton but the biggest nations are Germany, Canada, USA, Russia and Latvia.

What is your favourite/least favourite track?

I think Lillehammer in Norway is my favourite. Or St. Moritz in Switzerland; it’s just the most stunning place. I don’t really have a least favourite, but I haven’t spend much time at Lake Placid and I had a nightmare in Whistler last winter.

How many people do skeleton in GB?

There are about 20 athletes in the British Skeleton talent and performance programmes. A lot of military men and women also compete in skeleton.

Are GB good at skeleton?

Yes we are! We have medalled at every Olympics since the sport was reintroduced in 2002. At the last Olympics we brought home three medals; one gold and two bronze.

How do you start and stop?

To start, you push the sled one-handed and then jump on. The aim is to build up as much speed from the start to take down the track. Sleds do no have breaks. After the finish line, there is more track which is called the outrun and is uphill to slow you down. You usually need to break using your body or feet to cause drag as well. Breaking can sometimes be the worst bit!

Are you on a special diet?

Not really. I am quite ‘light’ for a skeleton athlete so I am trying to put weight on meaning I more have to focus on the volume of food I consume and the calorie density of that food. Every athletes different though; we all eat differently depending on our needs.

How long does a run take?

It varies track to track as they are all different, but on average a run takes around a minute from start to finish. We do two to three runs a day.

Is it cold on the sled?

Not really. If it is extremely cold (like -15) then sometimes but realistically, you’re much more focused on sliding and getting that right. If it’s really cold I’ll wear double thermals under my race suit and even maybe a snood!

What body type is best for skeleton?

There isn’t one! If you look at the best skeleton athletes in the world, for example the PyeongChang Olympic medalists they are all completely different shapes and sizes.

How I look after my mental health 🧠. Last autu

👀 Watch this if you have tight hips from runnin

Are you an enthusiastic runner who’s fed up with

📣Happy and excited to announce that I am… Jo

1️⃣ piece of advice if you’re returning to t