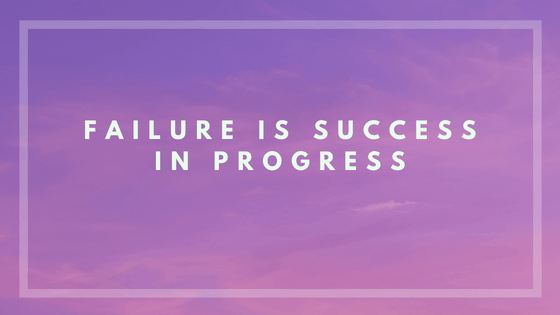 ‘What is your biggest fear?’

For me it used to be a fear of failure, of messing up, of not being good enough at something or getting it wrong. Oh, and birds!! Now whilst birds still terrify me, failure does not. It is a common fear though, that of failure. That little voice inside your head that tells you, you can’t. And then you listen to that voice, and you don’t start that new fitness class or apply for that job, or register to ParkRun that week. And you move a little farther away from the dreams and goals you have for yourself and living the best life for you.

I first started to understand that failure is nothing to fear when I began training for skeleton in late 2014. It was inevitable that as a complete beginner (aged 25!) at a technical and dangerous sport I’d fail more than I’d succeed – at least to begin with. I wasn’t particularly comfortable with this idea but fortunately I was encouraged by my coaches that failure was okay.

And fail I did! And I still do. In my first year of skeleton I think I crashed more than anyone else in my team! And then in my second year I hit my ankles so hard and repeatedly that I almost broke them. I had two concussions in as many years and split my chin open in four places over the course of a few weeks sliding. On top of the physical pain that these incidents caused I also had to contend with my mind craving to be as good as my teammates who were miles ahead of me in terms of number of runs. I felt rubbish a lot of the time and questioned my ability and place in the sport.

My worst failure to date…

was this year in Whistler. I was in my fourth year of sliding and felt ready to take on the ‘fastest track in the world’; a track a luge athlete tragically lost his life on in the 2010 Vancouver Winter Olympic Games. I was not ready, I had the worst two weeks I’d ever had on my sled. What you don’t see on Instagram (although I should probably show this) is the sit-down showers I cried through or the footage of me crashing run after run unable to get to grips with the track. It didn’t show how difficult it was for me to pick myself up day after day and try again when I didn’t believe I could conquer the track.

So, we can agree. I have failed, time and time again! But do you know what? I wouldn’t change it. As horrible as some of those times were I am a better slider for it now. From hurting my ankles, I learnt how important it was to control my legs. From my concussions, I learnt that I need to have more control in my sled than most people and from crashing I have learned what lines do not work and why. Moreover, I now understand myself as an athlete far more than I did before. I know what I need to be in place to slide well and I can manage nerves and stress more effectively.

To take control of your life you need to accept failure. I rarely use the word to be honest (apart from in this blog it seems!). I remember something my first skeleton coach told me ‘there is no such thing as failure, it is just a learning experience’. I’ll admit it is a bit cliché and your first thought when you’re knee sliding down a track at 100 kph without your sled isn’t ‘oh well, what a great learning experience this is’ (in case you’re wondering it’s more like ‘this f***ing hurts, I hate skeleton!’). But once the hysterics have passed and you reflect there are always learnings to be had for next time.

Realistically though, it isn’t always possible to just ‘accept’ failure. So here are my top tips to help you begin to embrace and cope with the idea of it.

• Be as prepared as possible to give you the best chance of success.
• Stifle that voice. Recognise the thought, stop it, breath and replace it with a positive, encouraging thought.
• Practise mindfulness, staying present can help the dwelling on past negative experiences or worrying about what might go wrong in the future.
• If you don’t nail it first time, tell yourself it is okay. Then reflect on what happened, why and if you could have done anything differently and what you might change next time.
• Remember, everyone fails. Even the most successful people on the planet will fail, it’s human.
• Keep trying (remember what you learned). Try and you will succeed.

Running and strength training CAN go hand in hand

Strength training makes you STRONG and FAST, not h

Are you a sunrise or a sunset mover? I love getti

⬆️ STRENGTH EXERCISES FOR RUNNERS Go from u